In this work, we introduce MIDI-DDSP, a hierarchical model of musical instruments that enables both realistic neural audio synthesis and detailed user control. We infer explicit interpretable features for note, performance, and synthesis level, and we build models at each level to generate audio in a hierarchy. Here, we present the audio example results for MIDI-DDSP. For details about the system and architecture, please refer to the paper linked above. 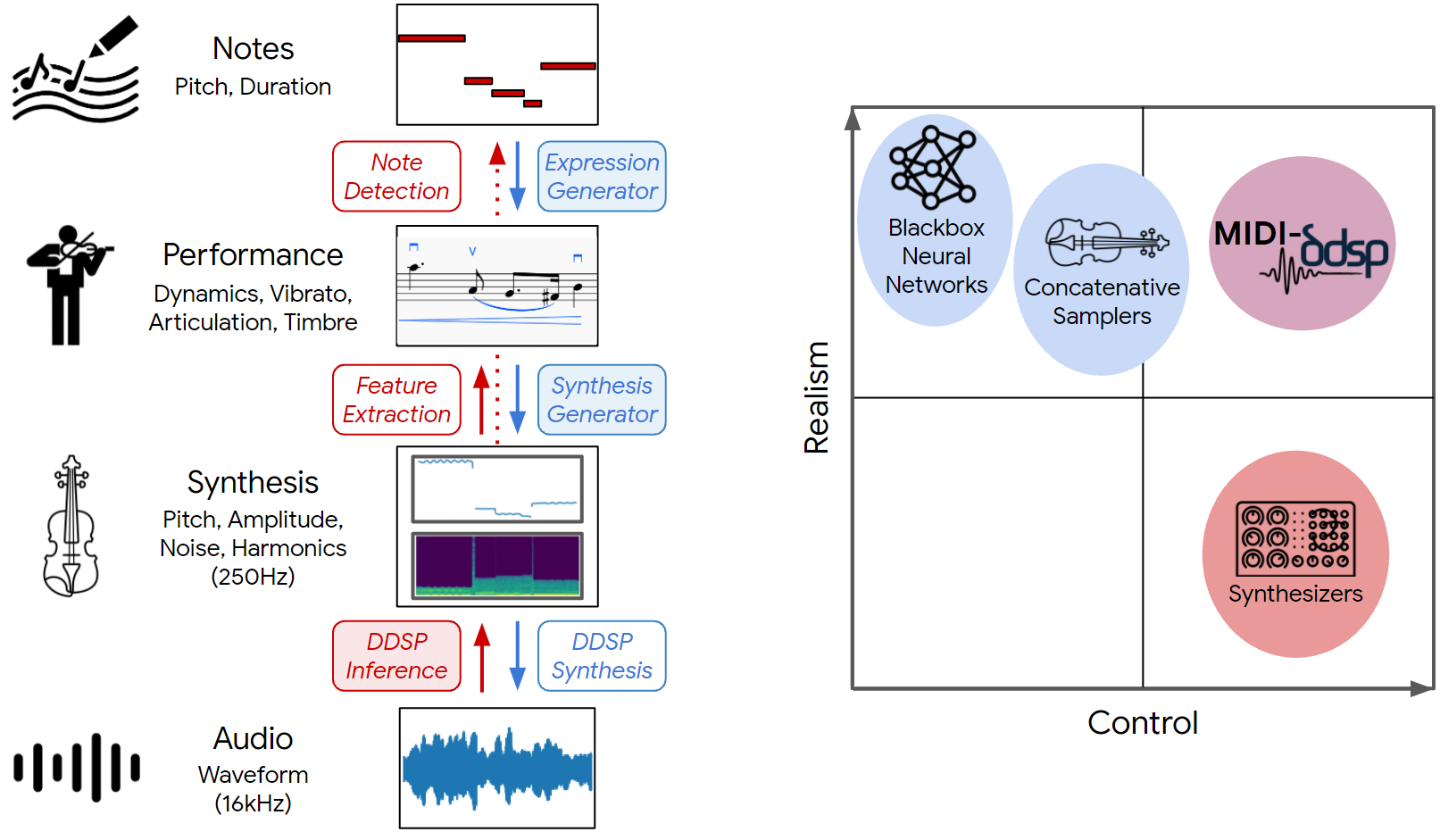 The given performance on violin (top) is manipulated at all three levels (notes, expression, synthesis parameters) to create a new realistic yet personalized performance (bottom). An initial generation is automatically generated from the full MIDI-DDSP model (top), and an expert musician adjusted notes (blue), performance attributes (green), and low-level synthesis parameters (yellow) to craft a personalized expression of a musical piece (bottom).

MIDI-DDSP can take note input from a score level Bach composition model CocoNet and automatically synthesizing a Bach quartet by generating explicit latent for each level in the hierarchy.

CocoNet re-harmonization of Ode to Joy in woodwinds set.

Thanks to wide range of instrument recordings provided by the URMP dataset, we can also render CocoNet re-harmonization of Ode to Joy in string set (an octave higher).

To demonstrate modeling a variety of instruments, we use the URMP dataset, a publicly-available audio dataset containing monophonic solo performances of a variety of instruments. Here we present a selection of the training data we used. Also, the recordings in the URMP dataset are played by students, and the performance quality is substantially lower compared to virtuoso datasets (MAESTRO) used in other work. Typically, some recordings have bad intonation accuracy, which makes MIDI-DDSP also having intonation accuracy problems in synthesis. Here we also present some playings of the training data that are out of tune.

Training set playing out of tune:

MIDI-DDSP enables detailed control, especially performance level control. Here we present given a violin MIDI score, how a human expert violin performer will adjust the automatic generation to makes it to the way an expert will perform. 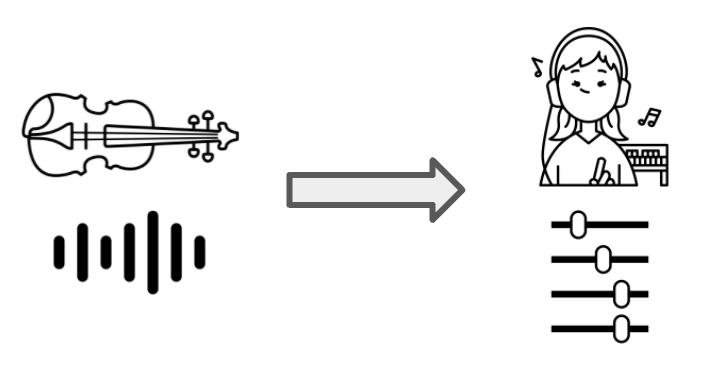 And we can also turn a performance from score into another interpretation:

Pirates of the Caribbean:

Here we present the automatic score-to-audio synthesis of MIDI-DDSP on generic MIDI input. Learned to perform from data, MIDI-DDSP can generate idiomatic details of human performance. For example, in some syntheses, breathing sounds between notes are generated.

In MIDI-DDSP, manipulating note-level expression can effectively change the synthesis-level quantities. We show by taking a test-set sample (middle row) and adjusting each expression control value to lowest (bottom row) and highest (upper row), how each synthesis quantities (rightmost legend) would change. The dashed gray line in each plot indicates the note boundary.

More details about note expression controls including Figure 8, 9 and more can be found here.

The listening test results on Test-set MIDI Synthesis. All the audio samples below are generated with only MIDI from test-set as input. MIDI-DDSP synthesizes more realistic audio than a prior work MIDI2Params, and two concatenative samplers. 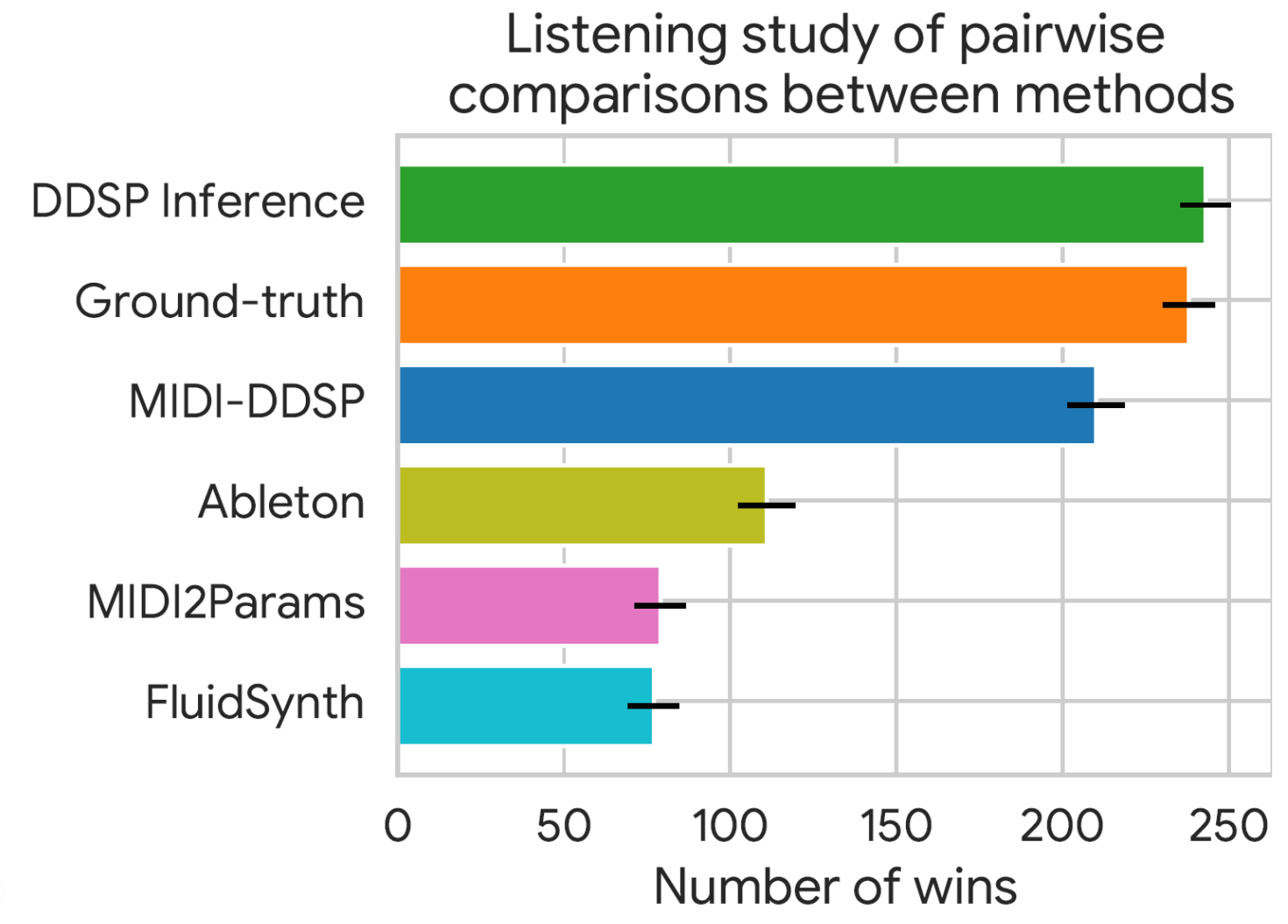 For access to all the samples used in listening test, please check: https://github.com/MIDI-DDSP/MIDI-DDSP.github.io/blob/master/violin_listening_test.zip

For test-set generation of all other instruments, please check: https://github.com/MIDI-DDSP/MIDI-DDSP.github.io/blob/master/test_set_all_other_instruments.zip

This section presents a step-by-step user experience of an expert using and adjusting MIDI-DDSP to obtain satisfied music performance. Specifically, the human expert as a violin player will iterate on adjusting note expression controls, starting from what the expression generator predicts for a given piece. Figure below shows the original music score "Viva La Vida" as input to MIDI-DDSP.

The expert designs special articulations of the notes for artistic purposes. In this example, the expert designed some notes to play as staccato. The results are shown in Figure below where the purple dot above the notes indicates it to play as staccato. To adjust notes to staccato, the volume fluctuation, volume peak position, and attack noise needs to be adjusted from the original value. Specifically, the expert increases the volume fluctuation, decreases the volume peak position, and increases attack noise. Similarly, the expert first adjusts the vibrato of the note and fine-tune the numbers based on the synthesis result. In this step, the expert report that decreasing vibrato can help generate better staccato notes.

After all designing and adjustments are made, if needed, the expert takes a final revision of the piece by fine-tuning the expression controls of the notes. In this example, the expert does not fine-tune the piece in the end as the audio synthesized by the previous step is good enough.

Here we present the ablation experiment results on note expression to find out if the performance quality improvement to MIDI2Params comes from the better/bigger model or the additional stage. For that purpose, we trained a synthesis generator with the same loss and GAN objective and uses the same hyperparameters as MIDI-DDSP. An audio sample of MIDI synthesis using this model is presented below. In conclusion, using only a synthesis generator without note expression can generate performance audio almost as good as MIDI-DDSP. However, the model will occasionally generate “dead-pan” notes without any expression (the note starts from 6s in the sample show below). Thus, the performance improvement of MIDI-DDSP largely comes from using a better/bigger model, namely a synthesis generator. However, the additional stage (note expression modeling) makes the audio synthesis more robust and more importantly enables the user editing on performance level.
Full audio samples can be found here: https://github.com/MIDI-DDSP/MIDI-DDSP.github.io/blob/master/no_expression_experiment.zip